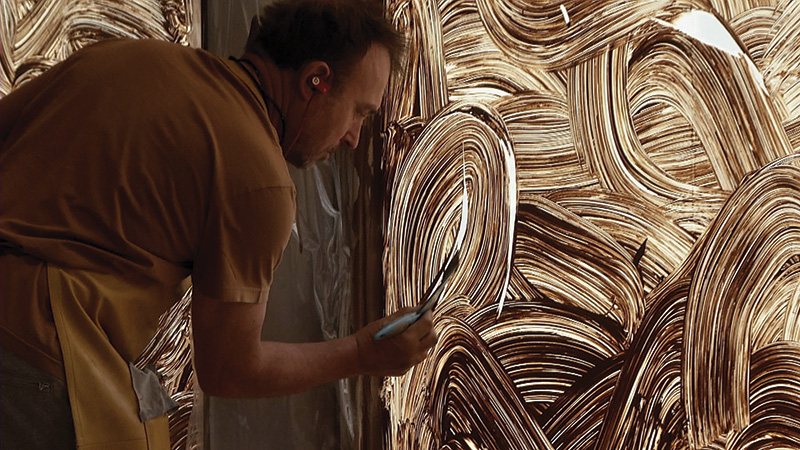 In 2016, two Parisian institutions, the Picasso Museum and the National Library of France (BNF), presented the contemporary Spanish artist Miquel Barceló with a playground on his scale, or should we say his lack of scale. The Picasso Museum offered him its basement in which the artist decided to erect a wall entitled ‘the great wall of heads’, a large construction held together by an archaic cob which was intended as a series of self-portraits. A work full of holes, which allows air and light to pass through, aspiring to a certain form of lightness. At the BNF, the artist took over more than 1,000m2 of glass walls and executed an ephemeral fresco traced with fingers and primitive tools in wet clay. A whole world of earth and light emerged, populated by the animal motif, seized by a powerful organic force.

Director Christian Tran spent many an hour with the artist at work, capturing both his fascinating gestures and his luminous and erudite words about art in general… which in no way prevents him from listening to football matches while working. In addition to the creative process of these two monumental works, the film also gives us the opportunity to visit, still with the artist, the cathedral of Palma de Mallorca where, between 2001 and 2006, Miquel Barceló erected 300 m2 of ceramics in relief, representing the Parable of the multiplication of the loaves and fishes and with which he created quite a controversy. But it is, above all, the descent into the Chauvet cave and the artist’s comments on the cave drawings that constitutes the highlight of the documentary and that sheds spectacular light on his work. Scratching, scratching, digging, kneading, tracing, … Barceló’s entire oeuvre is reminiscent of raw art, of rituals, of a pagan or sacred trance. And by revisiting time and again two of his performances (‘Paso Doble’ in Avignon and ‘L’image fantôme’ in Salamanca), Christian Tran creates a kind of ritual, a ballet around an extraordinary artist.